She wandered through the long grass, eyes searching everywhere. Her candy-apple red Mustang convertible shone in the hot mid-day sun, but its glare faded behind her as she slowly walked further and further away from it. From behind her she heard the beginning of the tune "Material Girl". She had left her cell phone in the car. Any other day, she would have been in a panic to flip open her life-line and primp for the call. Today, it did not matter though.
"Where was it?" she wondered to herself , stopping every once in a while to scan around her.  It seemed she had looked everywhere and was beginning to lose hope that she would find it. A pout crossed her face and she was tempted to stomp her foot. Looking around her, she found her audience coldly unfeeling to her plight. No one cared. She was alone in her search with no one to direct to do her bidding. Her petulance dissolved in a huff. Her eyes stared flatly at the markings around her. Thoughts of tears were wasted here. This too would bring no assistance, although a single pearl slid down her cheek. She stumbled across a tree branch and crumpled to the ground. A small cry escaped her lips and she winced in pain. Finally her self-pity got the best of her.She shuddered and flung herself to the ground erupting in the tears that now were too real to control. It was too much. She sat hunched over in the grass letting the sobs escape her.
The wind whispered in the trees around her. Slowly she slackened her torrents and sat up. The whispers seemed to call to her. A brisk wind blew through an oak that hung its branches down to the ground. Its movement drew her eyes and she slowly lifted herself, drawing towards where the branches swayed. Her hand reached up to still the branch that hovered. The energy that flowed dropped her to her knees again. Her gaze took in the soiled pantyhose, then focussed beyond. She had found it. Desperately she scrabbled through her purse. Her fingers finally found the sought after item at the bottom; an old tooth brush. With shaking hands, she scratched at the soft limestone covered in ancient mosses. The letters emerged unwillingly one by one, until at last they were all revealed. Her expensive polished manicure was a memory left in yesterday's visions. She stared at the name written in front of her. Her mind blew hollow, as the wind drifted away. The sun retreated behind a cloud-cluster that had formed rapidly over top of her. Hard droplets splattered on the stone at her wrist. The brush clattered to its surface
and she was gone. 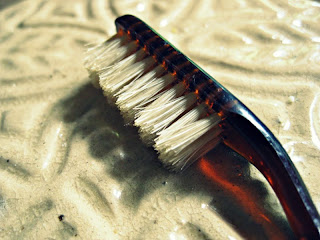 This is a Magpie Tale
Crafted by Katherine Krige