The Haunting of Henderson Close 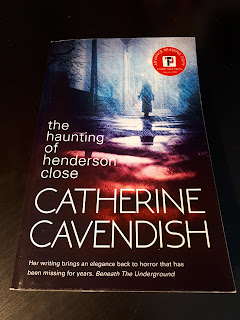 I am not usually swayed by horror. As a child, I was invariably under a blanket during the scariest parts of any horror movie my sister forced me to watch. They scared me silly. Truth be told, I am still a wimp when it comes to horror today.

From a young age though, I became an avid reader. And despite steering clear of horror films, I went through a phase where I read almost every book in our school library on ghosts, UFOs, supernatural occurrences, and other creepy titles. While they aren't a mainstay of my reading anymore, when I had a request to review 'The Haunting of Henderson Close' by Catherine Cavendish, I couldn't resist a good ghost story. And I am glad I did.

The newly released 'The Haunting of Henderson Close' is set in Edinburgh. The story takes place in present day, but frequently dips back in time to 1891—a period of heavy crime, poverty, and general filth in Victorian-era Henderson Close. The pivotal moment in the past is when Miss Carmichael, a kindly, humanitarian woman trying to bring up the lot in life of some of the Close's worst families, is brutally murdered. Her death shakes the community then, but reverberates through history to 2018 where Hannah picks up her tale.

After years of the dregs of society habituating Henderson Close, Edinburgh buried its past. New buildings were erected over the site, but a popular tourist attraction hid underneath, luring tourists with creepy ghost stories and tales of murder. After fleeing a failed marriage, Hannah finds herself attracted to a job as a period-costumed tour guide in Henderson Close, but the ghost stories she tells fall far too close for comfort. Before long, Hannah is swept up in the evil that still lurks in the Close and is bubbling to the surface once more. She, with the help of co-workers George and Mairead, must work fast to prevent the Auld De'il from creeping back into present day Edinburgh. But what will it take? And who, or what, else can be called on to help?

Like I mentioned before, horror makes me cringe and this book brought on a few goosebumps as I read it. The story immediately drew me in and I flew through the 233 pages in a day. If you like a good ghost story, this easy read by Cavendish is just the thing. Thank you to Smith Publicity and Flame Tree Press for an advanced reading copy!
Crafted by Katherine Krige No comments: