The Secret Life of Mrs. London

Step back in time to the rumblings of the Great War. Europe is preparing for battle and America is watching on, at odds with whether they should join in or leave well enough alone. Many people loudly voiced their opinions, including famous writer Jack London. It was one of the qualities that initially attracted Charmian Kittredge, who later became his second wife.

While Charmian and Jack London were great intellectual equals, Jack took the spotlight in their relationship. Where Charmian was his typist and editor, Jack was the grandiloquent orator and prolific writer. Charmian charmed those she met, but Jack took life to the extreme; drinking, travelling, championing socialism, and womanizing. It was a challenge to fall in his shadow, but Charmian was no shrinking violet. So it should be of no surprise that when she met another powerful man of the era, she was drawn in by his magnetism as well. And who could resist the magical airs of none other than Harry Houdini?

Rebecca Rosenberg weaves a magical tale in this debut novel. Based on true events, she artfully fashions the story as historical fiction, painting a love triangle between Charmian, Jack London, and Harry Houdini. We see a different side to these public figures, as seen through Charmian's eyes and it is hard not to sympathize with her plight. I personally loved the peek under the covers that she offers readers and flew through the book's pages. Despite all of the characters' indiscretions, it is hard not to understand where their motives came from.

Ultimately though, this work is a body of fiction created by Rebecca. Since I had the pleasure to review her book, I thought it might be nice to ask a few more questions about it and learn more about her knowledge of Harry, Jack, and Charmian.

1. Jack London had several affairs throughout his life, beginning with Charmian herself when he was married to his first wife. Why do you think Charmian accepted his affairs, but he couldn’t let go of her indiscretions?


Rebecca - We have to remember the Londons lived in the early 1900’s when things were very different than they are today. Women did not have the vote. All of a woman’s possessions were owned by her husband. Yet, the Londons were Bohemians and philosophers who believed in exploring the possibilities of life and passion. They read Jung, Freud, and other philosophers of the day and often discussed and argued big issues of fidelity, the value of life, the meaning of the universe. In THE SECRET LIFE OF MRS. LONDON, Jack London writes several novels about LOVE TRIANGLES, including LITTLE LADY OF THE BIG HOUSE, HEARTS OF THREE, MARTIN EDEN. London toys with Charmian in order to experience (or imagine) the feelings of his characters. As the London’s pushed these boundaries of fidelity, they experienced jealousy, which brought them back together, more in love than ever.

2. Both Charmian London and Harry Houdini were supposedly happily married but ended up having an affair with each other. Why do you think they were drawn to each other in the first place?


Rebecca - The mystery of why Charmian London and Harry Houdini would have an affair, when they clearly adored their spouses was the impetus of the novel! The answer to this question would spoil the novel in a few ways, let me just say there are very real reasons the affair happened, and I hope readers will understand that when they read it! Jack London and Houdini had their similarities and differences. Both were driven geniuses, and pushed human existence to its limits. But Jack drank and smoked with a passion and battled with depression. Houdini was an expert swimmer, runner, weight-lifter for his daring escapes. He never smoked or drank. I think Charmian was attracted to Houdini for some of the same reasons as she was Jack, but Houdini had a cool aloofness that could have been a relief after Jack’s intensity.

3. Charmian was an aspiring writer herself. While Jack tried to get her published, it was only with his insistence that her novel finally received publication from his publisher. Considering she was Jack’s muse, typist, and editor, do you think her writing should have stood on its own recognizance or is it fair that it was only published because she was Jack’s wife?


Rebecca - Jack London’s publisher was MacMillan, and he was their best selling author, so they would naturally look at Charmian London’s books, especially since they were biographies of their lives. I think her books, Hawaii and Log of the Snark are fascinating about their travels in the early 1900’s through the South Sea Islands and Australia, encountering Lepers, Headhunters and cannibals. Yes, I think they could have stood on their own, but given Jack London was the most famous, well paid author, the books served a double purpose of giving the public a glimpse into the London’s adventurous life.

4. Where Jack London and Harry Houdini’s lives are both well known, Charmian is barely a footnote in their stories. Why did you choose to make her your main protagonist? What attracted you to her story in the first place


Rebecca - First and foremost, I feel that Jack London could not have written 50 books in 15 years without the talented Charmian Kittredge.

She was truly a woman ahead of her time. Charmian was college educated and worked as the assistant to the president of Mills College. She learned to type as a teenager and typed 150 words a minute. She was a champion horsewoman and concert pianist. She was an intelligent conversationalist, and consummate hostess at Beauty Ranch. She managed Jack’s moods and kept him writing one thousand words a day, no matter how he felt or what else was happening. She typed up his stories as he told them to her, then edited them later, filling in characters and description. She was a huge part of why Jack London’s stories are still popular today. In fact, CALL OF THE WILD was just named top 50 best loved books of all time by PBS.

5. A major sticking point for Jack was when his beloved Wolf House burned down. Who do you think started the fire and why?

Rebecca - This is a spoiler alert, since I leave the question open for the reader to decide! According to Charmian London’s biography, JACK LONDON, “We never knew who torched Wolf House.” You can still see the haunting ruins of the 25,000 square foot log lodge at JACK LONDON PARK, in Glen Ellen, California, an hour north of San Francisco’s Golden Gate Bridge. Much later, scientists have claimed the house was burned down from spontaneous combustion.

THE SECRET LIFE OF MRS. LONDON has been named as WIKI’S 12 MARVELOUS NOVELS OF THE 20TH CENTURY. https://wiki.ezvid.com/m/kNkCn2l8yxVIl

Thank you so much to Rebecca Rosenberg for sharing a little more about her debut novel The Secret Life of Mrs. London! Add it to your Christmas wish list this year.
Crafted by Katherine Krige No comments:

Where Dragonwoofs Sleep and the Fading Creeps 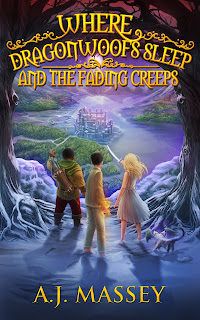 Where Dragonwoofs Sleep and the Fading Creeps, by A.J. Massey, © 2018, Independently Published

Being 13 is hard. You have to deal with self confidence issues, bullying, and the determination to reach your goals—even if that goal is only to ask the cute girl in your World History class if she'll go to the school dance with you.

Ben has bigger issues than if Taylor will go to the dance with him though. Every time he closes his eyes, he ends up in Meridia; a mythical land that is slowly being eaten away by the Fading. It is up to him to stop it, plus fellow dreaming 13-year-olds Avery and Marcus, not to mention a translucent elf named Tam, and three dragonwoofs. With a dose of magic, a dollop of courage, and the strength to work together when it matters most, these characters battle evil generals and the quickly encroaching Fading to save this fantasy land, plus grow into the confident young adults they aspire to become.

Does the story sound familiar? Fans of The Neverending Story and Labyrinth might think so. It should come as no surprise then that as a child, Massey was influenced by 80s fantasy movies like those, plus other epic coming of age tales. The dream-like qualities in the book mirror those tales, but also serve to inspire a new generation of heroes. Heroes that also battle self doubt and poor self esteem, but find the fortitude to work together for the good of others. Will it be enough though?

There are goblins afoot, scorching suns, and plenty of monsters intent on murder within the pages of Massey's debut novel. Young teens with a taste for adventure will cheer along with Ben, Marcus, and Avery as they traipse across Meridia. You just might find yourself enchanted too. And decide that you need your own dragonwoof to help make the world a better and safer place for all.
Crafted by Katherine Krige No comments: