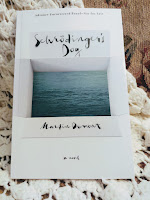 Loss is a difficult topic for people to read about. Grief is messy and hard, and full of emotions that many don't know how to deal with. When you mix loss of spouse with critical illness of a child, the result might seem more than anyone can bear, but Martin Dumont handles it honestly in his debut novel Schrödinger's Dog.

Yanis is a single parent. His wife died in a car accident almost twenty years ago, after a serious illness. He was left with a young boy—Pierre—whom he devoted his life to. But now there is something wrong with Pierre and Yanis doesn't know how to fix it. He can avoid the issue, like he did with his wife when she was ill, but putting Pierre inside a box doesn't stop the cancer that ravages his body. Time is racing and bringing up a grief that Yanis didn't even know he had. But the box is open and can no longer be closed.

Does something exist if we don't look at it? That is a theory of quantum mechanics that Physicist Erwin Schrödinger proposed in 1935; that if you put a cat in a box with a potential poison, until you observe it, the cat simultaneously may be alive or dead. It is more complicated than that, but also simpler. It boils down to observation. Is something real if it is not directly observed? That is the story that Dumont plays with in his poignant novel.

A theory exists that Yanis' wife committed suicide. He never fully contemplates it, thus gives no life to the supposition. As Pierre's health declines, he refuses to see the signs. But can he create an alternate world for his son regardless of the reality that comes with his illness? This is something many people who have faced serious illness wish for, but the box is sadly fallible. Looking in the box or not does not change the outcome. But the story itself is yours to write.

Dumont does a lovely job of exploring loss, grief, and the emotional challenges that come with it in Schrödinger's Dog. For a slim novel, it packs a punch worth reading.
Crafted by Katherine Krige No comments: 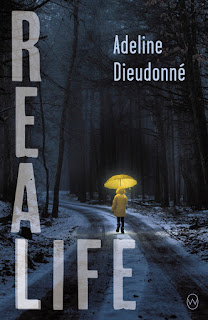 This is where Real Life starts. At least that is where the story begins in Adeline Dieudonné's stunning debut novel. And funny enough, it wasn't until I reached the end of the book that I noticed that the main protaganist in Real Life doesn't have a name. The narrative is written in first person, thus remains nameless throughout the book. This is telling, as her voice is poignant to the reader, but silent in her real life. Make no mistake though. She orchestrates her outward silence, all while working hard to create a better life for the only person she truly cares about—Sam. But silence comes with a cost.

It is not only the narrator who remains nameless in Dieudonné's novel. Her weak and ineffectual mother is referred to simply as an amoeba; spineless and without form or creativity. Her father—a raging, brute of a man intent on pain—also gets no additional title. Even neighbours whom she forms a loose bond with only get the titles of Feather Girl and Champion. They are both adrift in their lives and only represent a means to a way out; through idyllically floating above life or dabbling in sexual escape.

Aside from Sam, the only other characters who earn titles are Monica, Professor Pavlović and his wife Yael.

Names. What do they mean and represent?


For our narrator, she names things she loves and respects the most; her once innocent brother, a neighbour who gives her the initial spark to fight to change her life, her teacher who gives her the tools to make a difference, and his wife whose strength to stand up to violence—and the price she paid for it—all represent the best of who she wants to be. Those names are hard-earned and deserving in that vein of thought. Conversely, the decided lack of labels represent the holes our narrator sees herself needing to climb out of.

Dieudonné paints a world where family relationships are complicated, violence is endemic, and the choices we make shape everything. Make the right choice and rise above the rabble or, conversely, be destined to mediocrity or worse. Education is key. As soon as Monica's worth is spent—she gives the narrator the key to escape with the story of Marie Curie—she disappears from the story. Her role is noteworthy though, as Monica's spark, her inspiration, begins the possibility of going back and changing what the future might look like. The keys are in maintaining your innocence (Sam), hard work (Professor Pavlović), dedication (Yael), and a little insight (all herself), that she better understands the path. The trick is knowing which path to take and which parts should remain in place. Sometimes a life or death decision. 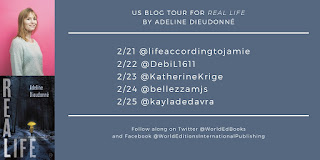 Of course, that is only my take on the book. I tried not to let in too many spoilers, but just know that I enjoyed it in its darkness and light, its violence and redemption. I happen to know that a few other people have read the book too and have insight on Real Life. Time for some blog hopping to visit the other bloggers taking part in the World Editions blog tour! If you get the chance, make sure to see what Jamie Wong, Debi Lantzer, Meredith Smith, and Kayla Whitter think of Real Life.

Even better, grab a copy yourself and let me know what YOU think.