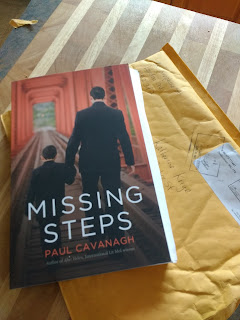 Missing Steps by Paul Cavanagh, © 2015, Not That London, Publisher

Dean Lajeunesse has a chip on his shoulder. He was only 10 when his father first started showing signs of early-onset Alzheimer's. Back then, no one knew that the erratic behaviour, memory lapses, and withdrawal from normal everyday activities were signs of a disease. They were embarrassing at best, and stress-inducing every step of the way for everyone touched by his father's illness.

Dean's mother coped the best she could; she worked several jobs, leaned on the neighbours when they needed to borrow their vehicle to track down Dean's Dad after he had wandered off, and tried to stay stoic in the face of his worsening condition.

Dean's brother Perry lost himself in sports, extracurricular activities, and his school studies. Any closeness that had existed between brothers was lost in the confusion surrounding their father's illness.

And Dean? He was left to figure out his Dad's dementia on his own. His response was to draw away from everything and everyone. And even after his father was hospitalized, institutionalized, and then died, Dean still refused to step out of his own shell.

Flash forward several decades and not much has changed for Dean. He is still loathe to let people in to his life and blames others for his lack of intimacy and overall success. But when his boss pulls him into his office to discuss his recent questionable behaviours and erratic performance at work, Dean can't help but fear that perhaps his father's Alzheimer's has struck him. Before he can think too much about it though, he is summoned to his mother's bedside and discovers not only that she is dying, but that his big brother Perry, who was always the successful and popular one, has been diagnosed with the dreaded Alzheimer's disease. And the years of animosity, standoffishness, and enforced separation come tumbling down when their truths are laid bare.

Paul Cavanagh doesn't aim to have you like his characters, but as his stories unfold, you learn to understand them and perhaps get a little insight as to why they act the way they do. We are all formed from the experiences we live, but we don't have to be stuck in their shadows. With a little honesty and insight, we can learn or perhaps unlearn a lifetime's worth of lessons. Sometimes we just have to give life a chance to show us the way and accept help when it is offered.
Crafted by Katherine Krige No comments:

All Waiting is Long 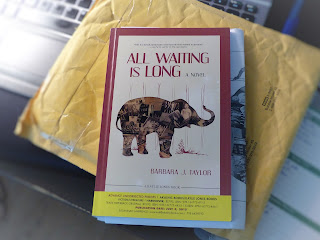 The generous folks at Akashic Books often send me emails regarding books they are publishing. When I heard that Barbara J Taylor had a sequel out to Sing in the Morning, Cry at Night, I jumped at the chance to read it. And it didn't take long to get through.

As the book opens, sisters Violet and Lily Morgan arrive at the back door of the Good Shepherd Infant Asylum. The front door is only for doctors, adoptive families, benefactors and the clergy; and the girls are none of these things. Lily has gotten herself pregnant at age 16 and her older sister Violet has agreed to accompany her to the asylum as a cover story so no one will guess her real predicament—her illegitimate pregnancy. The problem is that when Lily delivers the baby, Violet struggles to abandon the girl to strangers.

As the years pass, the girls clash and struggle from the decisions made years before. Taylor deftly weaves a tale that quickly pulls you in wondering what will become of them and the lies they've propped up around themselves to make it all work. Will their relationship survive? And if the truth were to come out, what would their husbands, family and the townsfolk think?

I won't spoil the novel any more than that, but suffice to say, if you enjoyed 'Sing in the Morning, Cry at Night', you won't be disappointed with Taylor's newest novel.

Thanks again to Akashic Books for offering me the chance to read an advance copy of 'All Waiting is Long'! Another great read from the Kaylie Jones Books line.