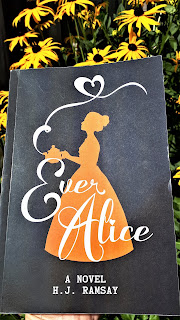 Have you read Alice in Wonderland? Who hasn't been swept down the rabbit hole by Lewis Carroll's classic novel written in 1865. Well, you are in for a treat today. This much-loved book has finally got a sequel with the help of H.J. Ramsay. Only 'Ever Alice' is a little darker than Carroll's original version.

When Ramsay reintroduces us to Alice, she is locked in an asylum; put there by her concerned parents. Alice can't stop talking and thinking about the White Rabbit, the Queen of Hearts, and everything she saw in Wonderland. The inhabitants of Wonderland haven't forgotten her either. But the Queen of Hearts has stepped up her game. Heads are rolling faster than ever. It seems like the only way to stop her is for Alice to return to Wonderland. If Alice is willing...

Intrigued? You should be. Maybe you need a little more to whet your appetite though? How about a little taste of what Alice and the Queen are up to.

Alice stared at the spoonful of red syrup. It may as well have had a note saying, “Drink me.”
Nurse Hazel said, “Open wide.”
Alice took the medicine into her mouth and let it pool under her tongue while she made a show of swallowing. The taste of nutmeg and something metallic, almost like blood, made her eyes water.
“That’s a good girl,” the nurse said. She wiped the spoon, capped the bottle, and left the room.
The lock clicked.
Alice waited until the nurse’s steps faded into the symphony of shrieks and moans that always rang down the hallway, and then she spat the medicine in the sink before her thoughts could curdle like an overheated custard.
She wiped her mouth on her sleeve and reached under the bed, wiggling the loose floorboard. Her tattered notebook lay in a cavity between the joists. She dusted off the cover and flipped past her drawings and recollections until she came to a fresh page.
Her hand itched to fill it, but she waited with her eyes closed. At last, he came to her, like he always did. She drew the White Rabbit, a timepiece in his paws, the chain dangling from his waistcoat pocket.

Chapter 2
Rosamund
House of Hearts, Wonderland
Lilly of the Valley 11, Year of the Queen

A light drizzle misted the air while the drummers played “March-O Death-O.”
Rosamund, the Queen of Hearts, tapped her fingers to the beat.
So very appropriate.
Of course, Rosamund wouldn’t have expected anything else. All ways were her way, and whatever way she wanted, she generally got, even if only in the end.
Her perch on the tower balcony gave her the best view of Thomas as her guards led him to the block. Her lips melted downward when she saw the proud expression on Thomas’s face.
The traitor.
Rosamund wanted Thomas to look afraid, pathetic even, but he appeared exalted, as if he were walking to his coronation, not his death. It would be better if he acted a little remorseful, but that was Thomas’s problem—he never did what she wanted.
She bit her lip until she tasted blood. Tears sprang to her eyes, and Rosamund dabbed them ceremoniously with her handkerchief. She glowed with satisfaction as her people followed suit, shaking their heads and giving her their bravest faces.
They’ll always love me.
Rosamund forced more tears to flow until she could taste them. She took a breath as the drummers rattled out a long, steady beat that reminded her of a purring cat.
She hated cats, but that didn’t concern her at the moment.
The traitor stopped before the block, and the drumming ceased. A dreadful calm lingered in the air. Slowly, he dropped to his knees and rested his chin on the chipped stump.
Thomas’s eyes flashed toward her.
She expected to see anger in them, perhaps even hatred, but there was only pity.
The executioner raised the axe and the drummers started a low and steady roll.
Brrrrrrrrrruuuuuuuuummmmm…buh DUM.
The axe sliced through the air, and his white head dropped into the basket in a baptism of blood. No one turned away. Not even as Thomas’s legs twitched on the ground. They watched her, waiting for what she’d do next. She draped a black veil over her face.
“Lower the drapes,” Rosamund said to a palace servant. “I am a widow today.”

And just so you know, Ever Alice is available now on Amazon.