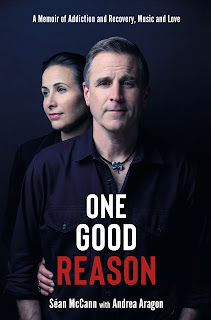 One Good Reason: A Memoir of Addiction and Recovery, Music and Love

"I carried my heavy secret around for thirty years because I was ashamed of myself and afraid to tell my parents what happened. Over time this shame grew into anger and eventually into a sense of immense betrayal. Each year it took more and more booze and drugs to keep my hidden suffering at bay. My dark secret was slowly eating away at me from the inside, like a caged animal trying to get out."

Séan McCann was sexually abused by a priest—a trusted member of his community and personal friend of his family—when he was 15 years old. He told no one, until standing in front of an audience in London, Ontario on September 26, 2014. That was nearly three years after he got sober, but was preceded by thirty years of hard drinking, excessive drug use, and the mental struggle to keep those memories at bay. It almost killed him.

Andrea Aragon met him along the voyage, as Séan rocked out the tunes of Great Big Sea on a twenty-year-long party tour. She had her own demons, but the two of them clicked. Together, they made a life, but that life didn't erase the secrets or stop the drugs and alcohol from flowing. Somehow Andrea held onto the love that brought her and Séan together throughout many dark and confusing years. That love and a tribe of support buoyed her up and helped her remember the reason why she was there in the first place. Sometimes all it takes is one good reason.

And together they share their journey through addiction, abuse, music, recovery, and love with us.

Full disclosure. I have always been a big fan of Great Big Sea and love their rollicking party tunes. I saw them more than once on their constant tours and was always excited to be part of the joyous event. The energy in their music is intense, and their live shows never disappointed.

I even met Séan one evening during the Home County Music & Art Festival in London, shortly after he left Great Big Sea. He had just played a solo set on the main stage and was now part of the audience enjoying the next musicians to hit the stage. I noticed him standing behind my children and I.

"Do you know who this is?" I asked them excitedly. "It's Séan McCann. He was just onstage. And he was one of the lead singers of Great Big Sea!"

He smiled and said hello. We chatted briefly and then I thanked him for sharing his music with us. He was gracious and real, in a way I always appreciate in celebrities. Musicians might hold epic rock and roll status, but they are people with lives of their own, and stories that mirror anyone's.

Those stories are often the power behind their lyrics. The words get inside you and make you feel like the musician knows your intimate details. Ordinary Day was one such song for me after my husband's death.


"In this beautiful life, there's always some sorrow
And it's a double-edged knife, but there's always tomorrow
It's up to you now if you sink or swim,
Just keep the faith that your ship will come in.
It's not so bad...

I say way-hey-hey, it's just an ordinary day
And it's all your state of mind
At the end of the day,
You've just got to say... it's all right, it's all right"
~ lyrics form Ordinary Day by Great Big Sea

Yes, there was always tomorrow. And I learned to live with that double-edged knife, as awful as it felt in the moment. What I didn't realize though, was how double-edged that party was for Séan or how his story would mirror mine again later.

Séan was trying to drown his past; to forget it in a haze of drink and drugs. But life doesn't work that way. You can try to ignore past hurts, but they have a way of integrating themselves into every fibre of your being, and shaping everything. A friend recently revealed to me that he was sexually abused as a child. That revelation clarified and changed everything I knew about him. He too hid in plain sight, his pain so obvious to see, now that the secrets were cleared away. I am beginning to understand the many bad decisions he made—drinking, drugs, poor relationships, emotional detachment—in light of the trauma he went through. The journey to heal has only just begun and, in light of our current pandemic, seems harder to navigate. But as I turned the last few pages in One Good Reason, I have hope that like Séan, hopefully my friend too can heal.

Even more than that, I see a message to the wider world. Séan found healing through the power of music, but more importantly, through honest human connection. The journey isn't always easy. Sod that, it is damned hard! The whole world needs healing and connection right now. But hold faith that our ship will come in. It's not so bad...


But the book... Would I recommend it? Yes. I loved the reflection between Andrea and Séan. You see both sides of a life lived. We are offered more understanding in how the hurt and harm of secrets buried can radiate. But you also see the pure strength that can come from holding those secrets out and letting them go. It is far from easy and the road stretches farther than from where you can see. But you don't need to be alone. And that is reason enough to carry on.

Thank you for sharing your words, your music, and your love Séan and Andrea.
Crafted by Katherine Krige