Boekenweek Part 2: You Have Me to Love 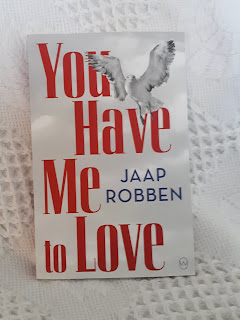 You Have Me to Love by Jaap Robben, Translated by David Doherty, © 2014, World Editions

Grief is a familiar topic for me. So when I read the description of 'You Have Me to Love' by Jaap Robben, the theme spoke to me.

"On a remote island somewhere in the North Atlantic, a nine-year-old boy looks on helplessly as his father is swept out to sea. Consumed by guilt and paralyzed by his mother's frantic grief, Mikael cannot bring himself to tell the truth about what happened. As the pair struggle to restore the fragile balance of their isolated lives, the young widow starts to demand the impossible of her only son."


A woman distraught over the loss of her husband is relatable. Hearing the story from her son's perspective is intriguing. Delving into her complicated and prolonged grief is disturbing, but worth exploring with the help of Robben's powerful prose. How does anyone handle someone stuck in their bereavement, especially when you have your own loss to process and understand? That is Mikael's challenge, and he is only 9 years old when his father drowns. Plus, he lives on an isolated island with no other support at his disposal to help either himself or his grieving mother. It sounds like a recipe for disaster.

While the subject matter is challenging, Robben tackles the novel with an unexpected beauty. Guilt is a familiar emotion in grief and Mikael struggles with it, especially as he is the only witness to his father's death. As the years pass, he tries to embrace love and acceptance once more, only to be confronted by his mother's inability to process her own grief. Add to that the spectre of loneliness—another component of bereavement—and compound it with their remote island home. How is one to find hope? Readers can only pray that Mikael can find the strength and maturity to combat his mother's impossible demands. To say anything more, would spoil the plot for readers eager to dive into Robben's highly-acclaimed novel.

The book is currently being adapted into an English-language film.


'You Have Me to Love' is the second novel I had the pleasure of reading for Boekenweek. What a week to celebrate; a festival of literature for 10 days! I choose to read Thirty Days and You Have Me to Love to explore both a Belgian (Verbeke) and Dutch (Robben) author—Belgium and the Netherlands being the two main host countries of Boekenweek.

While Verbeke's novel was excellent, Robben's perfectly touched on this year's theme—The Mother The Woman. The blurred lines between those roles are a stark part of Robben's engaging narrative. As a woman, where do the lines start and end in motherhood? You might want to check out more books from this year's Boekenweek theme to help figure that out.

World Editions also provides more information about Boekenweek and the many tours, readings, and festivals going on in North America from March 23-31, 2019. They are proud supporters of high-quality English literature on a world scale, with an affinity for their European and, more specifically, their Dutch roots. Care to read more of their books? World Editions can help.